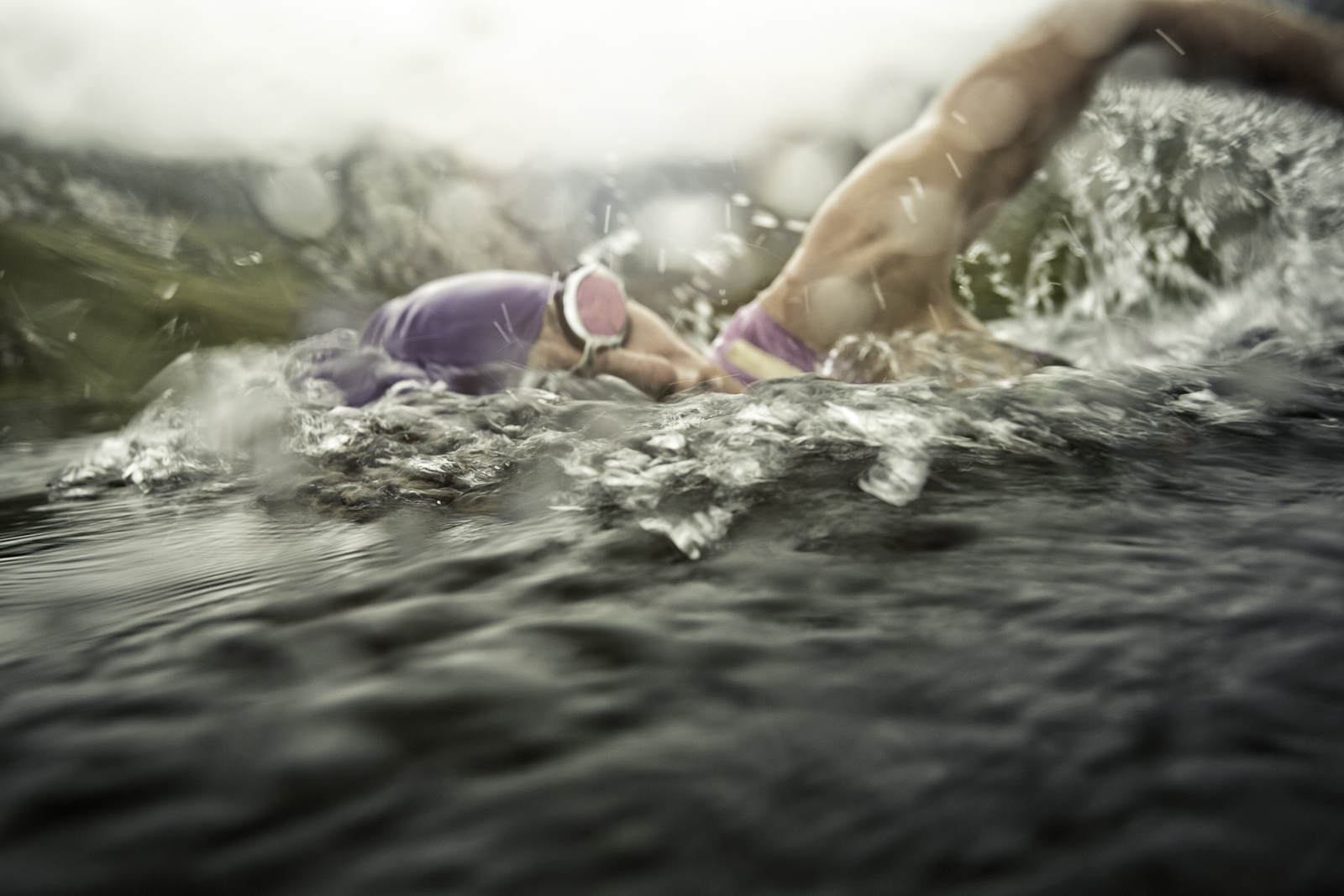 The return to triathlon after 2 years!

A lot has happened in life since my last triathlon - Xterra Denmark 2017- and it's 2 years to the day that I will be toeing the line again for the inaugural Xterra Luxembourg!

I was actually planning to do a few low key practice tri's before attempting an Xterra Pro race, however it has been such a crazy year, it just hasn't possible to do so.

By the time I was fit enough to race post-baby, we were moving house and relocating to Dorset. I then had 6 weeks settling in the new house and trying to train with dog and baby (you can read my previous blog on that if interested!) while Simon worked away in Reading. As soon as school holidays came around it was time to fly to the USA for 3 weeks for my brother's wedding! I actually hoped to race Xterra Nederland in Colorado (not a Pro race) while we visited friends in Boulder, but sadly that was the same day as the wedding!

And so it was I ended up on the start line of Luxembourg feeling completely unprepared, and lacking any race conditioning. I had had one practice at a swim start the previous week at Weymouth Aquathlon, which went terribly! I was very rusty on my tactics, and although this time went slightly better, it was still far from ideal as I seemed to miss every pair of feet I tried to get onto, I have not practiced the art of drafting in 2 years!! Eventually I settled into a group of 3 for the latter 1000m, I thought I was way down the field but pleased to be announced as 4th female out of the water. 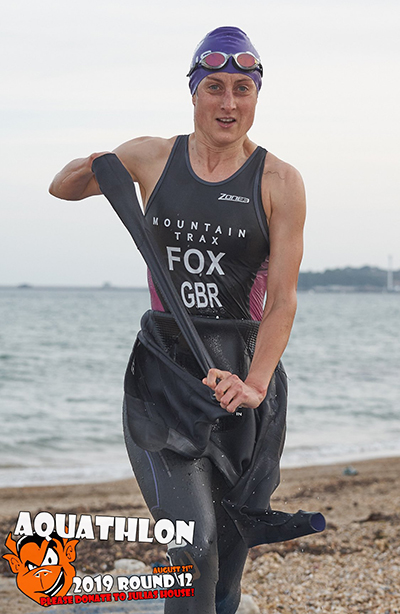 The first half of the bike went pretty well given my lack of mileage; I was hoping to rely on skill rather than power, but it was not really a technical course - instead one for the climbers! While there were a few fun obstacles on the singletrack, the time I could make up here was small compared to any lost on the climbs! I felt I lost a lot of ground on the 2nd bike lap, cramp set in, and power went down.

It was my main fear - getting cramp heading into the run, knowing there were a couple of very steep banks on the course. I wondered how I would get past those without my legs seizing up completely, and the answer was I couldn't! I probably lost 20 places on one short climb (mostly men, but thank you Coralie for a helping hand on your way past!) as I could barely put one foot in front of the other. There was no real pressure knowing there was no-one I could catch, but it was still disappointing not to be able to do myself justice on the run.

Overall though I was happy to have given a reasonable performance (7th Pro) and made it to the finish. That is certainly not something you take for granted in Xterra, and while it wasn't on the epic scale, Luxembourg was by no means an easy course!

It was great to be back on the race scene, catch up with old friends, make the trip into a camping holiday with the family, and best of all have my Torben there supporting the race (well, being carried around by Daddy!) The best part of the day was crossing the finish line and giving him my medal! Of course he doesn't know the significance of it but he enjoyed playing with a bit of bling ;) 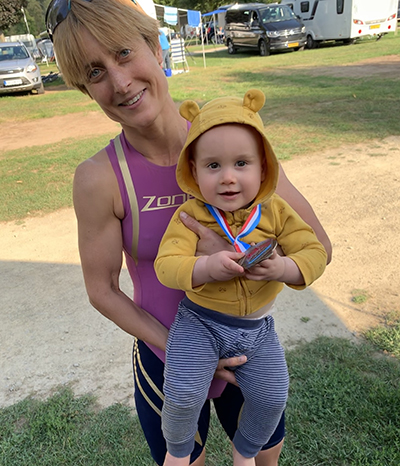 Torben with the bling!

Less than a week later, I was on the start line again for my second and (sadly) final triathlon of the season - the TrailX Offroad Triathlon in Pippingford.

I'd say this is a course that far more suits my strengths, as it was shorter than Luxembourg, much more technical on the bike, and with no push-up sections that you had to get off and walk.

Everything about this course was so much fun (and I can't recommend it highly enough for UK off-road fans!) It started with an adventure swim - like SwimRun- through 3 different lakes with a short run between each. Then more running uphill to transition and onto the 2-lap bike course. Here there was so much sweet singletrack (and the opportunity to get some air if you dare!) and yes, climbing, but not enough to make the cramp set in, which is a big tick for me! The run was a scenic one, if sometimes technical underfoot, through woods and stunning purple heathers. 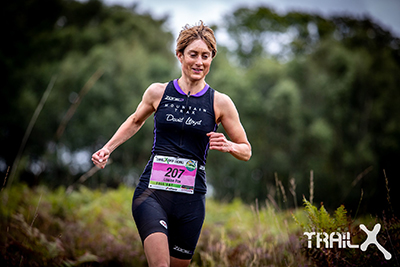 Enjoying the trails at TrailX Triathlon

A big bonus was the women had our own separate race - for once you know where you are in the field, and no being elbowed out of the way by Age Group men (yes it's a minority that are inconsiderate, but it spoils the race for me in events like Xterra France)! There is also great support around the course as not everyone is racing at the same time.

As for how the race unfolded - I exited the swim in 2nd place - led out by Nicole Walters, and was happy to still be within sight as she set off up the run to transition! This time I stayed in 2nd place throughout the whole race, and that was as good as I could hope for in this field! 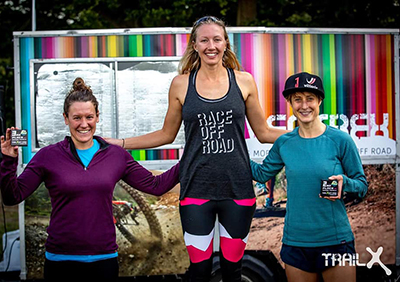 Back on a triathlon podium :-)

It's been a very late start to the season, but I have missed racing a lot and didn't want to wait until next year, even though I'm not quite back to Pro level. It has also been useful for coach Mark to get a benchmark as to where we're at and plan for the winter. Hopefully I will be back to racing full fitness again in 2020 - watch this space!